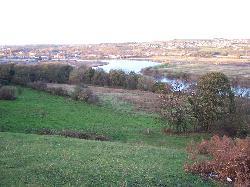 Old wildflower meadows with a fine views over the Tyne and a fascinating ancient history.

In the 1930s the bodies of a man and a woman were found here at Summerhill. The skeletons turned out to be those of Bronze Age people who died over 4000 years ago.

The bones were found in a grave called a cist. Also included were a beaker and a flint knife. These grave goods were probably included for the dead to use in the next life. The man and woman may have been married and buried at different times although some still believe the woman was sacrificed and put in the grave at the same time as the man.  Following the reopening of the Great North Museum the reconstruction of the cist, which was formerly located outside the Museum, was moved inside.

Summerhill, once known as Summerhouse Hill, was named after a summerhouse. The remains of this protected building can be seen here today. The western side of the hill was called Image Hill because statues of two classical Greek figures of the god Apollo and the playwright Aesculapius, once stood there.

It is not surprising that our ancestors were attracted to Summerhill. Like us, they could appreciate the fine strategic views up and down the Tyne.

The Summerhouse was built in the grounds of a grand house, Stella Hall. The Hall was a manor house in the 12th century and then a nunnery. During the Battle of Newburn Ford in 1640 Stella village housed the headquarters of the English army and in 1651 Cromwell stayed at Stella Hall. The house passed through the hands of several coal magnates, industrialists and Durham University until its demolition in 1955.

Joseph Cowen, the well-known radical and industrialist, lived at Stella Hall. In 1867 he erected a statue here to the Italian political reformer Garibaldi. In 1900 the statue was destroyed. Some said it was knocked over by a cow but others believed it was toppled by Cowen's employees, forced to pay a penny levy towards its construction. You can see the head of the statue on display at Blaydon Library.

Old grasslands full of wildflowers are a rare sight in Gateshead. Since the 1930s the country has lost most of its traditional flower-filled grasslands. Only 1% of old pasture land remains in Tyne and Wear. Most of it has been destroyed by agricultural improvements and building development.

Look out for some of the special plants you can find growing here. On the wetter, lower slopes large numbers of northern marsh and common spotted orchids grow. These wet areas are dominated by Soft, Articulated and Toad Rushes but Ragged Robin, Meadow Sweet, Marsh Thistle, Valerian, and Marsh Ragwort also grow. In the drier areas Self-heal, Hardheads and Cats-ear can be seen growing amongst the grasses of Meadow Foxtail, Yorkshire Fog, Yellow Oat Grass and Crested Dogs-tail.

Because of its special importance, Summerhill and Stella Pastures has been designated as a Site of Nature Conservation Importance.

You can take a circular walk across the site taking in Path Head Watermill.

Access from the lay-by on the B6317 Stella Road