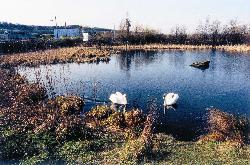 This small wetland is home to breeding Mute Swans, Mallards, Little Grebe, Tufted Duck, Coot and Moorhens which nest among the reeds and rushes. In summer the meadow is full of wildflowers and insects including the striking common blue butterfly.

Following a survey in June 2015, 40 bats of different species were observed feeding at the pond at dusk - this shows the importance of urban ponds such as Dunston Acer Pond.

National and locally important species which are also found on the site include breeding Hedge Sparrow, Song Thrush and Toad.

The pond appears to be fed by springs or by open ground drainage and the overflow is into a culvert into the northern corner of the site.

The pond has large stands of Reed Sweet-grass and Reedmace around its margins. This swamp community is scarce in the north east but is also found at Ryton Willows and Shibdon Pond.

The grassland on the eastern side of the pond is species-rich with Hardheads (Black Knapweed) Meadowsweet and Bird's Food Trefoil. There is also a small patch of Saltmarsh Rush.

Frogs, Toads, Palmate Newts and Smooth Newts spawn in the pond which also has a large population of Three-spined Sticklebacks.

How did Dunston Acer Pond get its name?

There was a rumour that Acer Pond got its name from a small child from Dunston who visited the pond sometime in its early life as part of a school visit and said, 'It's ace here' and this was misheard by an accompanying botanist as 'Acer' - the Latin name for maple trees including Sycamores!

Management of the site includes cutting and raking the 'meadow' (sometimes in spring but usually in late summer) and cutting back the hedge during winter.

Off Wellington Road (near railway bridge)