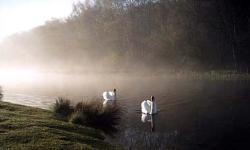 Between Station Bank and the Curling Pond you will find a small piece of brickwork beside the path. These bricks are the only visible remains of a specially built ice rink which was last used by the Newcastle Caledonia Curling Club at the beginning of World War II. In Edwardian times, the main part of the Willows was the site of a mini fairground with roundabouts, 'shuggy boats' and a café. There were also boats to hire on the ponds.

Ryton Willows also sits on the site of the only Registered Battlefield in Tyne and Wear. The Battle of Newburn Ford, which took place on the 28th August 1640, was an important event leading up to the start of the English Civil War.

The ponds at Ryton Willows are Sites of Special Scientific Interest because they have a very rich flora and fauna. Summer is the time to go out and see the colourful dragonflies and damselflies. During spring, watch out for frogs and toads that will be coming to the ponds to spawn. Underneath the surface is a world of dragonfly nymphs, mayfly larvae, water scorpions, great diving beetles and even leeches!

The beech trees on the slope of Middle Wood are thought to be the tallest in Gateshead and are an ideal home for nuthatch, great spotted woodpecker and tawny owl. Bluebell, lesser celandine and other flowers can be seen growing in the spring.

Flowers such as harebell and common sorrel can be found growing on the dry sandy soil of the grassland, where meadow brown and small copper butterflies fly on sunny summer days. Birds such as linnet and yellow hammer breed in the gorse.

Despite being 17 miles (27 km) from the sea, the Tyne is still tidal at Ryton. As a consequence of this, the water is slightly salty and this influences the flowers growing on the bankside. Look out in summer for the purple-blue heads of sea aster. Common seals are frequently seen up the river, attracted by the wide range of fish, including salmon. Birds to see along the river include grey heron, kingfisher and goosander.