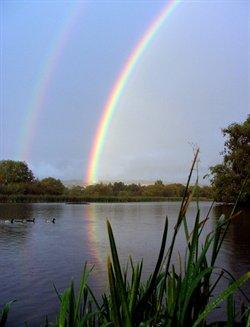 In the nineteenth century this site had been a series of wetland pastures, but this changed when twentieth century mining and railway activities altered the water level and formed the pond. Between 1837 and 1951 Blaydon Main Colliery dominated the site. The capped shaft can still be seen behind Blaydon Swimming Pool. This area used to be a refuse dump, but careful planting and management of native British trees will ensure a rich new habitat for the future. The grassland provides habitat for voles and shrews which attract hunting kestrels.

Bird life varies throughout the year. From the observation hide you will be able to spot common birds such as tufted duck, mallard, coot and moorhen. In summer, masses of insects swarm above the pond and these can attract swifts, swallows, house martins and sand martins in large numbers. Look carefully around the edge of the pond and you should see grey herons and water rail as they search for food. In autumn, kingfisher can be seen regularly along with waders such as greenshank and common sandpiper. During cold winters numbers on the pond are boosted by visiting wildfowl from Northern Europe. In past years, a wide range of scarce species from Europe and further afield have been noted including laughing gull and green winged teal from North America, ferruginous duck from the Mediterranean and glaucous gull and Iceland gull from the edge of the Arctic Circle. Also at this time cormorants roost on the main island on the pond in large numbers.

The marsh is a mosaic of reed beds and open pools which provide nest sites for birds such as sedge warbler and are ideal cover for otters visiting from the River Tyne. Where the marsh merges into grassland orchids can be seen during the summer months. The most obvious insect life is the dragonflies, damselflies and butterflies. In spring, look out for the orange tip butterfly and in summer the small skipper and meadow brown butterflies, common darter dragonfly and emerald damselfly. Heather, knapweed and yellow rattle are typical plants which grow here.

Beyond the marsh areas of scrub provide cover for many birds such as whitethroat and willow warbler during the summer months. Predators such as foxes are attracted to this area by the large number of rabbits which live here.

Beside Blaydon Pool on the B6371