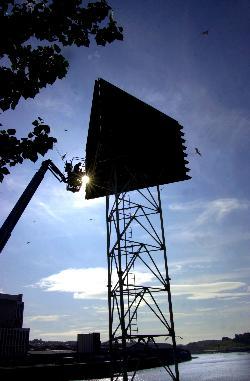 Look out for the birds returning to their high-rise home on the Tower from late March onwards. They will build nests and stay until the end of August, then go back out to sea for the rest of the year. The best time to see them with chicks is in late June and July.

If you 'd like a closer look when the birds are nesting in spring and summer, you can see live footage from the Kittiwake Cam operating again at Baltic, giving live images of the kittiwakes on the nesting ledge there, in a project led by Durham Wildlife Trust.

To find out more about kittiwakes, take a look at the Tyne Kittiwakes Partnership website.

You can find the Kittiwake Tower at South Shore Road, NE8 3AF, by the Keelman's Way Riverside Path. There is public parking available.

In 2016 Kittiwakes were added to the UK's Red List of Birds of Conservation Concern, because they are declining in numbers around the coasts of northern Britain.

Thankfully, our kittiwakes on the Tyne are bucking this trend, as they are doing well and not suffering the declines experienced elsewhere.

Traditionally kittiwakes breed on steep sided sea cliffs, but in the 1960s a small number of birds began to nest on old riverside buildings at Gateshead quayside, an incredible 10miles (as the kittiwake flies) from the coast.

True gulls of the open sea our kittiwakes spend half the year out in the middle of the North Sea and North Atlantic, only returning inland to breed from late February and March.

By the 1990s the Baltic Flours Mills building had become the main focus of kittiwake activity on the Tyne, supporting a breeding colony of around 200 pairs. The redevelopment of the Baltic as an international centre for contemporary art resulted in the loss of this iconic structure as a breeding site for kittiwakes.

Alternative nesting opportunities were provided for the birds with the construction of the kittiwake tower, a bespoke breeding platform originally located in Baltic square before being moved to its permanent location on the south bank of the River Tyne at Saltmeadows.

Located off South Shore Road and accessed via the Keelman's Way riverside path, the tower lies at the extreme western end of an attractive area of riverside green space. The area was reopened to the public in 2013 after the completion of a 1.5 million pound remediation scheme to deal with contamination left from past industrial activity. Today the site supports flower rich grasslands, hawthorn and blackthorn scrub and maturing woodland, and both butterflies and birds abound.

The Council carried out a project to clean up a small area of contaminated land within the boundary of the nature reserve, around the Tower. The area will be seeded with a wildflower mix in the spring. This will tie in with the surrounding wildflower meadows elsewhere in the nature reserve and along Saltmeadows riverside. It will improve the land around the Tower for wildlife - and make it look more attractive in the summer.

This project follows a successful breeding season in 2015 at the Kittiwake Tower, with over 90 nesting pairs of kittiwakes packed onto its ledges. This is 15% up on the previous year. The Tower has now stood for 18 years, 15 of them on its permanent home at Saltmeadows riverside.

The Tyne Bridge now supports the greatest concentration (c. 250 pairs) of kittiwakes breeding on the river. These ever resourceful birds have even managed to restore a foothold on the Baltic with some 30 nests lined up along a narrow ledge on the front of the building.

Three kittiwakes hatched at our Tower have crossed the North Sea and been found at a breeding colony at Boulogne in France, in the last few years. This French colony, just like the Tower, is a site where Kittiwakes nest on artificial ledges.

We have been able to identify these birds because they were ringed at the Tower by volunteers from Northumbria Ringing Group. The group carried out ringing sessions at the Tower every year for ten years, from 2003 to 2012.

by the Keelman's Way riverside path