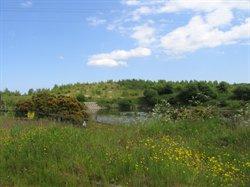 Stargate Ponds and Bewes Hills is an area reclaimed from former quarrying and opencast activities. It is an important area for many species of plants, birds and insects that are disappearing from the wider countryside due to development and modern agricultural practices.

The grassland supports breeding birds such as skylark, grey partridge and meadow pipit. Important insect populations include butterflies like the aptly named dingy skipper, this butterfly flies from mid May into June and thrives in areas with birds-foot trefoil and areas of bare ground. Another special insect of the bare sandy ground is the green tiger beetle, which can be seen on warm sunny days in early summer. Other grassland insects you may find include the small heath and wall brown butterflies and in mid summer thousands of burnet moths can be seen nectaring on plants like the field scabious and lucerne. In areas of gorse, linnets and yellowhammers may nest. Green woodpeckers are often seen flying up from feeding on the many anthills present.

The whole site contains many plants that are adapted to grow in well drained sandy soils like storks bill which gets its name from its seed pods and birdsfoot a rare and inconspicuous little plant which probably has its county stronghold in this area.

Around the ponds and ditches dragonflies like the common darter and migrant hawker can be seen along with emerald and common blue damselflies. Bird life on the ponds usually includes little grebe and mute swan with kingfisher seen occasionally.

All of these birds, insects and plants are here because of the short flower rich grassland habitat with large areas of bare sandy ground. It is hoped that a mixture of grazing, tree felling and bare ground creation will help the populations thrive for future generations to enjoy.Due to the important numbers of ground nesting birds on this site it is very important that dogs are kept at heel particularly from April to the end of August.

Beside the A695 at Stargate