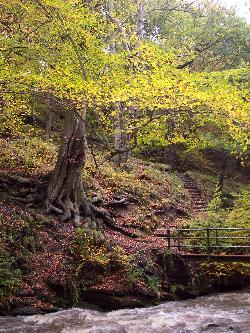 An Ancient Woodland with a long and surprising industrial history. Permissive paths and a public bridleway allows the opportunity to make longer circular walks including using the paths in nearby Beamish Wood in County Durham. Its hard to believe that for hundreds of years scores of people lived and worked here in what was than a busy, noisy industrial valley. As these industries closed and people moved away nature once more claimed the valley.

This wonderful ancient woodland was once the heart of a thriving industrial community. The waterpower from Beamish Burn was the driving force behind four iron forges, a flint mill a tannery, three corn mills, two fulling mills, a paper mill, a colliery pump and a blacking mill all operating within a mile of here.

Industrial activity started in medieval times rising to a peak between 1800 and 1850. In 1841 seventy six people lived and worked in the woods here.

The forges were major manufacturers of armaments for the Napoleonic Wars. In the early 1800's High Forge had the reputation of, 'casting the finest muzzle-loading cannon in England'. The Forges were leased to Hawks and Longridge, business partners based in Gateshead employing about 2000 people and described as a 'very progressive company.'

The woods were an important part of the industrial economy providing hazel for the collieries, oak bark for the tannery, ash as handles for the forge products and larger timber for the colliery and for other heavy industrial uses. The conifer plantation was planted later to create a reserve of timber to be used as pit props.

The Burn industries were so important that in 1803 a plan was drawn up to build a canal to connect the Burn to the Tyne. Fortunately, for the wildlife, this scheme was never acted on.

The industries started to decline when faster-moving, larger steam run factories started to be introduced. The great flood of 1877, which probably damaged many of the buildings, may have been the last straw for most of these businesses.

During this period of urban industrialization people started moving into the towns were work was more dependable and better paid. The last of the vacant cottages were demolished in the 1930s.

Ousbrough Wood is a Site of Nature Conservation Importance (SNCI). One half is ancient woodland. Here an Oak and Silver Birch woodland grows. In the more fertile areas, at the bottom of slopes Ash, Elm, Beech and Sycamore grows, giving a wonderful autumnal display. The other half of the wood is a conifer plantation of Scots Pine, Douglas Fir, Western Hemlock and Larch.

Beneath much of the woodland heathland plants grow i.e. Ling (Heather), Bilberry and Heath Bedstraw. This reflects a time hundreds of years ago when this area was a heathland. Today areas of heathland are so rare that they are protected from encroaching trees!

Today the wood is managed to conserve and enhance its wildlife. This involves removing some of the 'non-native' trees like Western Hemlock. In the future the conifer plantation will be thinned to allow areas of heathland and Oak/Silver birch woodland to re-grow naturally.

In the spring the floor of much of Ousbrough Wood is carpeted with Bluebells, Ramsons (Wild Garlic), Primrose, Dogs Mercury and Wood Anemone. These are plants which are normally only found growing in ancient woodlands.

The meadow, something of a sun-trap, is a good place to see butterflies. Look out for the Common Blue, Small and Large Skippers, the Meadow Brown, Small Tortoiseshell and Peacock. Roe deer and Foxes frequent the quieter parts of the wood.

Listen to the music of the woods, in spring and early summer the song of the Willow Warbler, Chiffchaff and Blackcap and the Great Spotted Woodpecker 'drumming' its bill against a tree. Look out for Dippers in the Burn. Stay in the woods until dusk and you will hear Tawny Owls calling.