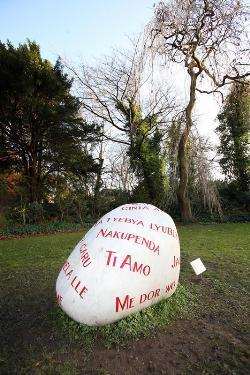 Gordon has carved a large marble sculpture in Saltwell Park.

'The stone I have used is marble from Italy. It lay on a Plymouth seabed for over a century and a half as the ship carrying it sank in a storm on route to London. A sea salvage firm recovered it as a training exercise for their divers. Originating in block form, the stones ocean adventures and decades of the sea have influenced its shape and form'.

The brilliant white natural colouring of the stone makes the sculpture appear to glow as it sits at the top of the South Park. The text inscribed on the stone uses various languages to express the feeling of love, a theme which has universal interpretation.

Gordon Young created the monumental stone carvings titled The Family which are situated outside the Gateshead Civic Centre and are often used as the backdrop to wedding and civil ceremony photography.

Young was born 1952 Carlisle and lives and works in Somerset.