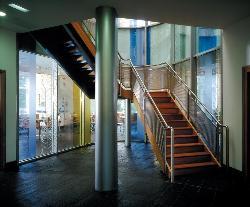 The building dates back to the 1850s and was reopened in the summer of 2004 after being restored and rebuilt during the extensive refurbishment of Saltwell Park.

The curved glass screen forms the core of the building, rising from the floor of the ground level to the ceiling of the first floor. The outside of the curve has been fired with bands of blue, grey and green and sandblasted stripes of ash and willowherb.

On the inside, Saltwell Willowherb is acid etched with the falling leaf stalks of ash and the rising spikes of willow herb, reflecting the natural forms and colours of the surrounding park.