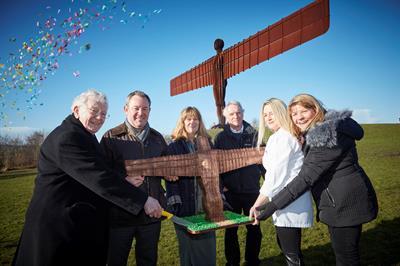 To celebrate the 20th birthday of the Angel of the North, on 15 February 2018, some of the people who helped to bring the Angel to Gateshead met on site to celebrate.

Alderman Sid Henderson, 87, who as a local councillor originally chaired the committee that was tasked with finding a work of art for the site, was guest of honour at today's birthday celebration.

Leader of Gateshead Council, Councillor Martin Gannon, says: "When we commissioned the Angel of the North, no local council had ever commissioned such a major work of art before".

"The Angel of the North divided opinion at the time and continues to do so, though I think most people have grown to love it. And that's what these celebrations are all about.

"The Angel of the North has become part of the fabric of our region and become part of people's lives. That's what we want to celebrate and that's why we are asking local people to get involved by sharing their Angel stories, their photographs and their memories."

Level 3 professional cookery student Lisa Duncan was given the opportunity to create a stunning cake inspired by Gateshead's Angel of the North to officially launch its 20th anniversary celebrations.

"I'm really proud to mark this momentous occasion by baking the official birthday cake," says Lisa. "It was a great opportunity to use the creative and culinary skills that I've acquired from my college course.

Designed by internationally renowned sculptor Antony Gormley OBE, the Angel of the North was built on the site of a former colliery pithead baths - a 'gateway' site recognised by Gateshead Council as the perfect location for a piece of monumental public art.

Its size and its location means the Angel of the North is the UK's most-viewed work of art, seen by an estimated 90,000 travellers on the A1 and the East Coast main line every day.

During the night of 14th February 1998, the Angel of the North made its long-awaited journey from Hartlepool where it was built to its new home by police escort. Due to its size, it was delivered in 25m sections which travelled at just 10mph.

At dawn on February 15th, the body of the Angel was carefully lifted into position by a 500 tonne crane and lowered it onto 52 three-metre bolts securing it to the ground. It took nail-biting twenty minutes.

It has become a potent and easily-recognisable symbol both of Gateshead and the North East and has featured in numerous films and on TV programmes such as Auf Wiedersehen Pet, BBC Match of the Day, the Chelsea Flower Show and the Eurovision Song Content.