About Sculpture created to celebrate the 150th Anniversary of the Blaydon races song in 2012. 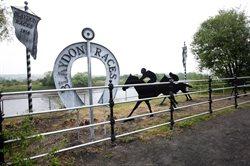 This public artwork for the West of Gateshead was commissioned by Gateshead Council to mark the location of the historical sites of the Blaydon and Stella Horse Race courses along the Tyne. The Sculpture was designed to create interest and a focal point for the new cycleway and footpath from Blaydon Burn to the Stella housing area. It is also contributed to the celebrations of the 150th Anniversary of the Blaydon races song in 2012.

The Sculpture interprets visually the popular horse races which were begun in 1811 on what is now the Blaydon railway Station site, which was moved to the former Blaydon Island, and ended in 1916 at the Stella Haughs course, now the area of the new build Housing.

The Sculptor Andrew McKeown created this artwork depicting a scene of racing horses with jockeys and a winning post. The 'flagpoles' are an artistic interpretation and 'borrowed' from the popular Blaydon races painting.

The work can be seen by those using the footpath and cycleway, across the river and is highly visible from the Newcastle to Carlisle Train line.

It can be seen by River craft and those using the Tyne for water sports, including all the Rowing Clubs along the River- sometimes amounting to hundreds of crews on visiting race days.

The artwork was funded as part of the Local Transport plan improvements of the national cycleway upgrade to the riverside, which is hoped will promote accessibility for pedestrians and cyclists to a new and interesting area of the Riverside in Gateshead.

More about the artist: Andrew McKeown

From Blaydon Burn to Stella Housing