About A massive 27-metre span of the steel sculpture, which reaches 11 metres in height and supports a spun steel ball 1.3 metres in diameter. 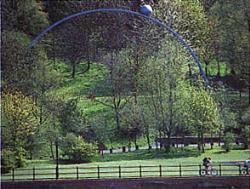 Originally made for Gateshead's site at the Glasgow Garden Festival (1988), Rolling Moon was subsequently relocated on the banks of the Tyne in 1990.

The Glasgow Festival was based on a nautical theme so the sculpture's design transferred effortlessly to its new situation.

Colin Rose's sculpture distills the idea of the moon's dominant effect on the oceans' tides and its influence on the whole of maritime history. This great lunar force encompassing the earth is symbolised by the massive 27-metre span of the steel sculpture, which reaches 11 metres in height at its apogee, and supports a spun steel ball 1.3 metres in diameter.

Rolling Moon is situated between the High Level Bridge and the Queen Elizabeth II, and its majestic curve links it visually, though incidentally, to the structure of the Tyne Bridge. Visible at a distance from across the river, the sculpture nestles quite discreetly into the bankside, waiting to be chanced upon by walkers on the Gateshead side.

(between the High Level Bridge and the Queen Elizabeth II)