About It is impossible to miss Sports Day, a massive sculpture and a well-known landmark. 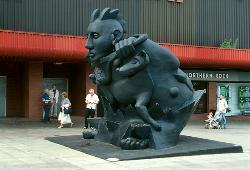 In West Street, Sports Day, was the first work made specifically for the Public Art programme. It was completed in 1986 as a focal point for the extensive scheme of environmental improvements in the town centre.

The 4-metre high sculpture of reinforced, painted concrete was made on site by Mike Winstone, Gateshead's sculptor in residence from 1985 to 86.

Although alluding to Gateshead's renown in sports and the International Stadium, the sculpture avoids clichéd representations of athletic prowess, tensed muscles and 'action' poses. More humorous than heroic, Mike Winstone's figure competes in the sack race - an event not known for poise and glamour.

The artist aimed to convey a view of sport which most people could identify with - one emphasising the excitement, enjoyment and optimistic exertions of a school sports day.

The sculpture also incorporates a salutary reference to Aesop's fable of the race between the tortoise and the hare.

Get Directions View on Google Maps
Was this page useful?
Yes No