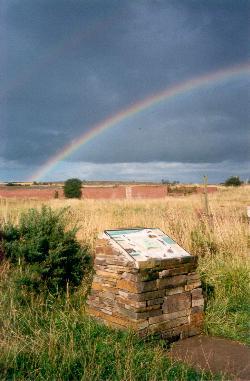 Heather clad lowland heaths are a very scarce habitat in the North East. In mediaeval times much of England would have been covered by heathland but in the last 200 years 80% has been lost. Now in Tyne and Wear only an area the size of three football pitches remains.

Heathland originally formed in areas where our native woodlands were felled and the soil became too poor for crops to grow. Constant grazing by deer or sheep then prevented the trees from returning and the woodlands from re-growing. Heathlands are made up of low and slow growing evergreen shrubs, mostly heather and heaths. This habitat is the home of many rare insects, birds and reptiles.

Burdon Moor was heathland at least 100 years ago before it was lost to agricultural improvements and opencast mining. Bringing Back Burdon Moor was a Gateshead Council project to try and re-create a lowland heath on a site were heather once grew. Work was carried out to remove existing vegetation and make the soil ready. Young heather plants and seeds were sown, trees planted and ponds created. In 2004 a circular walk was also built on the site.

Unfortunately the restoration of a heathland is a difficult process and it was not totally successful but the site has proved to be an excellent habitat for birds and is reported as being one of the best places in Gateshead to watch birds.

In winter you might see waders like Snipe and Jack Snipe and wildfowl like Teal and Mallard as well as Heron on the many ponds there. Sometimes there are large flocks of Golden, Plover, with as many as 500 birds. The site is good for birds of prey like Sparrowhawk, Short-eared Owl, Kestrel and even a Merlin has been seen there. You may also see Stonechat, Yellowhammer, Reed Bunting, Linnet, Meadow Pipit, Skylark and winter thrushes like Fieldfare.

In 2005 we worked with Sunderland University, who engaged two high level Chinese scientists on placement in the north east, to study how well the young heather plants were growing.

Artists have been working with local people to create artistic features for you to enjoy. Look out for the wildlife ceramics on the large boulders adjacent to circular path. These were created by ceramic artist J Kay Aplin following workshops with local women. Also look out for 'Frog' and 'Stone Seat' by Gilbert Ward.

A free Marking the Way leaflet is now available, this has information on the many surprising countryside sites in the area of south and central Gateshead and the importance of this area to wildlife and local history.

The leaflet also highlights the many sculptures and artworks placed in the area to add delight and interest to the visitor.