Art in the countryside 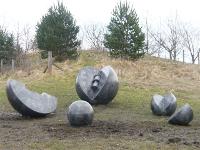 Sculptor Jim Roberts was commissioned by the Council to design and make a signboard, sculptures and way-markers to indicate the different trails around Watergate Forest Park.

The artwork produced has a link to either the original industry that occupied the site at Watergate Colliery or to the flora, fauna or wildlife that can be encountered in the park. Local children took part in the design of the artworks and took part in practical workshops led by Jim at three nearby schools.

The artworks are made from mild steel, forged and fabricated in Jim's workshop. They have been hot-dip galvanised, etch primed and two pack lacquered giving the sculptures a 'gun metal' finish. 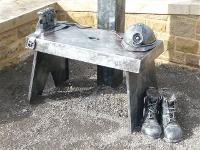 Jim Roberts is a Sunderland based Sculptor who has worked extensively in many parts of the North East region. 'My work involves the design, manufacturing and siting of sculptural steel artwork. It often entails my interaction with various community groups. I have worked in numerous locations in the North East producing site specific sculptural pieces for various outdoor settings.

The history, location and the intended site all inspire the completed artwork. When creating site specific artwork it is important to ensure the work is robust as well as aesthetically pleasing in order to create a more desirable environment.'

Gateshead Riverside Park on the River Tyne in Gateshead is home to 13 artworks, some of artists of international standing including Cone Andy Goldsworthy, Rolling Moon  by Colin Rose and Rise and Fall by Lulu Quinn. For more information, visit the  page. Woodland management works are currently being carried out to improve the Park for residents and visitors. 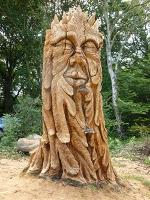 Local wood sculptor Tommy Craggs carved a mystical 'Green Man' using the remains of a diseased Beech tree which stood at the entrance to the Visitor Centre. 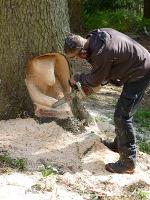 Tommy spent a week in the woods in 2011 transforming felled trees in the Derwent Walk Country Park into creatures great and small including a flying Red Kite, a badger hidden in a tree and butterflies using a chainsaw. He said, "Each piece takes about half a day to a day to create. I've been making sculptures with a chainsaw for around nine years now and it's great that I'm able to create something out of a fallen or felled tree, which would normally be used for firewood, that the public can appreciate." 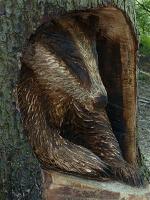 These new features came as part of Gateshead Council's five year restoration project in woodland across the borough, the aim of which is to restore the ancient woodlands of Derwent Valley, Watergate Forest Park and Ousbrough Wood near Beamish, to their former glory. The restoration project saw selected trees harvested and extracted to allow woodland plants to recover and native trees to re-establish themselves naturally.

This area, in the shadow of the Angel of the North, has over a 20 year history of placing sculptures in the landscape to add interest and delight. This work first started in 1991 with the Marking the Ways project and carries on today - continuing to use artworks to waymark the surprising countryside of south Gateshead. 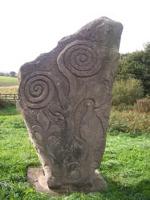 The Marking the Ways leaflet, which is available at the Countryside Visitor Centres, and Libraries lists the 35 artworks which can be seen in the countryside of south Gateshead and especially along the Bowes and Tanfield Railway Paths.

Download the Marking the Ways Leaflet [972.01KB]  Please be aware the actual leaflet is large being A2 size.

Many of these are modest stone or timber sculptures by local artists including Gilbert Ward but there are also a number of larger pieces by internationally recognised sculptors including Floating Rocks by Colin Rose at Watergate Forest Park.

Other works include by Greenheart William Pym and  Circling Partridges by Graciela Ainsworth.

The countryside around central and south Gateshead is one of the area's best kept secrets. Once a landscape dominated by coal mining and the development of the world's first railways the area is now an attractive and fascinating place to visit.

There are a wide range of woods, parks, nature reserves and gardens most with free access where you can walk, watch wildlife, look out for new artworks and explore the signs of our industrial heritage. 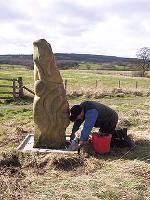 Whilst this area has seen enormous landscape change it still offers a glimpse of our industrial past. A number of sites and attractions can be visited in this area, just down the road from Beamish Museum including the Tanfield Railway - the oldest operating railway in the world and the Bowes Railway - the only operational preserved standard gauge rope-hauled railway in the world.

This area of Gateshead is also a fantastic place to see wildlife and offers a wide range of accessible places to visit ranging from ancient woodlands to newly created wetlands and meadows. Many of these sites are owned by the Council which also runs a varied programme of events through the year.