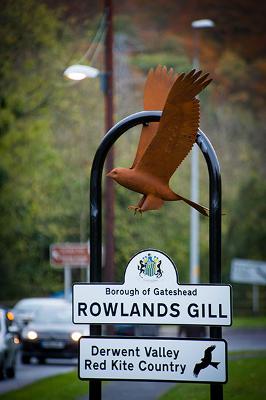 Craig Knowles designed and made this bespoke artwork depicting the Red Kite along with gateway signage that welcomes visitors into Rowlands Gill. The Gateway features are located at the Eastern and Western entries to Rowlands Gill.

Historically, Red Kites, Milvus milvus, were our most widespread birds of prey. However, between the 16th and 19th centuries, persecution and extensive poisoning drastically reduced their number. By 1850 they had gone from North East England. A remnant population survived in mid-Wales. In 1989, a series of re-introductions of Red Kites commenced with our Northern Kites Project being the penultimate one from 2004-2009, involving the release of 94 birds in the Derwent Valley.

The Friends of Red Kites (FORK) was established in 2009 to continue the conservation of these majestic birds. They have promoted how our Red kites have proved to be both a catalyst for commerce and an inspiration for creative people in Gateshead's Derwent Valley. Friends of Red Kites

This project was funded by the Local Community Fund.

Craig Knowles is a local artist blacksmith sculptor operating out of Simpson Street Studios in Sunderland.