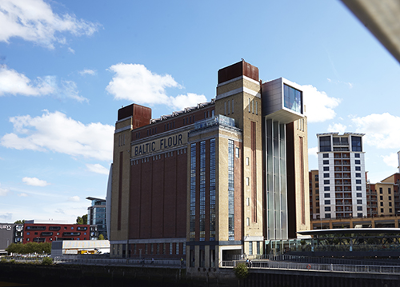 Housed in a landmark industrial building on the south bank of the River Tyne in Gateshead, BALTIC presents a dynamic, diverse and international programme of contemporary visual art.

We first conceived the idea of transforming the former 1940s grain warehouse into an international gallery in December 1992.

The exciting proposal to develop this disused landmark attracted widespread support and enthusiasm.

An independent report on the artistic potential of the building was published in 1992 and in early 1994 an international architectural competition was launched by the Royal Institute of British Architects (RIBA) to find an exciting and innovative design for the gallery.

In late 1994, Dominic Williams of Ellis Williams Architects was announced as the winner and a major feasibility award from the Arts Council National Lottery Fund in 1995 enabled detailed design work to begin.

The vision was to turn Baltic Flour Mills into a major force by:

As well as being important on the national and international arts scene the Baltic Flour Mills was also one of the key elements in unlocking the redevelopment potential of Gateshead Quays.

Leader of Gateshead Council at the time, Councillor George Gill, explained: "The Baltic Flour Mills is strategic to Gateshead...a physical and symbolic catalyst for the regeneration of the east side of Gateshead."

The Baltic Flour Mills was located on a prime site within view of the famous Tyne Bridge.

Dominic Williams described the thought behind his winning design: "The main aim is to allow contemporary art to happen in whatever form it takes. Often art installations take on, or pervert, the nature of the space they occupy."

His design retained much of the existing character of the building with its imposing brick exterior and concrete fins. The design proposal involved:

For information on the BALTIC and its history, visit www.balticmill.com