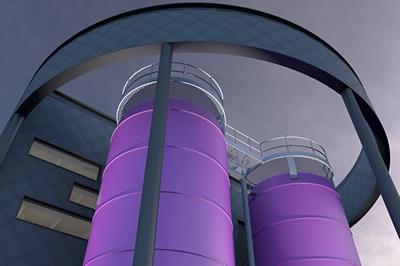 Gateshead Council opened the Gateshead Energy Centre in March 2017 to provide heat and power to the district energy network across Gateshead town centre and the Gateshead Quays area. The new, low carbon energy centre generates both heat and power for sale directly to customers via a new 5km underground network of heat pipes and high voltage 'private-wire' electricity cables.

Initially, the scheme supplied public buildings - Gateshead Civic Centre, the Sage Gateshead, BALTIC and Gateshead College - and homes managed by the Gateshead Council. However, the scheme has grown, connecting further Council buildings and depots, as well as a leisure centre, Shipley Art Gallery and Talmudical College. In 2020, the first new build office, the 5000m2 RIGA building, was connected to the heat and power network.

Between 2021 - 2023, the scheme will see its biggest expansion yet, connecting the following customers:

The scheme aims to continually reduce the carbon emission of energy supplied to customers, with the ambition of becoming zero carbon by 2030. The gas combined heat and power engines installed initially were the first step to a zero carbon future. Gateshead Energy Company has a 5 year business plan to reduce emission further, as follows:

What are the potential benefits to developers?

While connection to the district energy network will be a planning requirement for most large developments, connection also offers many commercial advantages to developers, which will be missed if development progresses using conventional heat and power supplies.

The benefits of connecting to the district energy scheme are as follows:

How does district energy work?

District energy schemes are a means to generate heat and power locally for customers, that is more efficient than conventional power stations.

They require a centralised energy centre, to generate heat and power for customers. The heat is distributed via an underground network of super insulated heating pipes.

The Gateshead scheme is 'heat-lead', which means our energy centre runs to provide customers with their heat requirements, first and foremost. When heat is being provided from the gas CHP engines, electricity is also generated.

The Gateshead scheme has a full set of back up facilities. The CHP engines do not run continuously. When customers do not need heat, or when the CHP engines are being serviced, heat is provided from conventional gas boilers, which operate as back up. Also, when the CHP units are not running, or when our customers use more electricity than we can generate, we import 100% renewable electricity from our own grid connection.

In this way, the scheme is as resilient, if not more so, than a conventional building with a gas boiler and grid connection.

As we green the network further, by adding other source of renewable heat and power - for example minewater heat pumps, solar PV systems - these will further supplement the heat network, and reduce our reliance on gas CHP engines.

This project is being supported by a grant from the England European Regional Development Fund (ERDF) as part of the European Structural and Investment Funds Growth Programme 2014-2020.

For more information or an informal discussion please contact:

Was this page useful?
Yes No