The Mayor of Gateshead is the First Citizen of the borough. Becoming Mayor is considered to be the highest honour within the council. The holder of the post carries out several important duties.

The Mayor presides over full meetings of the council and represents the borough at various events within Gateshead and further afield. In the Mayor's absence, these duties are undertaken by the Deputy Mayor.

In a typical year, the Mayor will attend around 1,000 events. The majority of these events are connected to local charities or community organisations.

Throughout the year, the Mayor welcomes visitors from home and abroad to their Parlour. Presents received from visitors remain in the Parlour as a permanent reminder of the many visitors hosted over the years.

The mace is the formal symbol of the Mayor's authority. The mace is used at full meetings of the Council and is carried in by the Mace
Bearer in front of the Mayor as they enter.

In the Stone Age a mace was used as a weapon. It became a symbol of authority in the 16th Century when Queen Elizabeth I declared that maces should only be used on ceremonial occasions.

The present mace was given to Gateshead in 1902. Made of silver with a fine coating of gold, it is one metre long and weighs around two kilos.

The mace has three distinct sections: 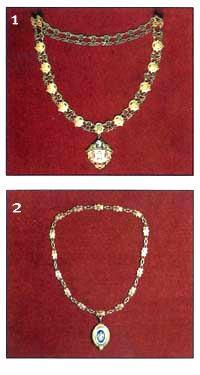 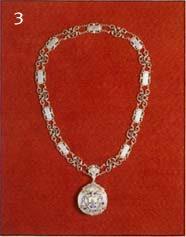 The Mayor wears the Chains of Office when on official duty. The chains worn today have been worn by every Mayor of Gateshead since 1851.

The Chains of Office are made of 18 carat gold and feature G- shaped links with a medallion bearing the coat of arms in the centre (1). The Mayoress wears a similar, smaller chain.

Every Mayor of Gateshead since 1851 has worn robes. They are made of red barathea, a fine wollen cloth, and lined with ermine.

The robes have large pockets in the sleeves as a reminder of the days when it was the Mayor's duty to collect taxes. A hat, a jabot and white gloves are worn with the robes. The Deputy Mayor has similar robes. Robes are worn at all ceremonial occasions, including full council meetings and church services.

The Coat of Arms

The present-day Metropolitan Borough of Gateshead was formed in 1974 when seven local authorities in the area amalgamated.

These local authorities were the former county borough of Gateshead, the urban districts of Blaydon, Felling, Ryton, and Whickham and the parishes of Birtley and Lamesley.

Of these seven authorities, Gateshead was the only local authority to have its own coat of arms. A competition was held to find a new coat of arms which would represent each of the areas within the newly-formed borough. The winning entry, designed by a pupil of a local junior schoool, was sent to the College of Arms, London with a request that it forms the basis of the new armorial bearings.  The coat of arms was formally adopted by the Council in January 1975.

The basic symbolism of the coat of arms is a simple pictograph; a gate (or portcullis) and a head (or helmet). The crown suspended on the helmet is adopted from Durham County Council's coat of arms, it is included to represented the areas of Gateshead which were previously in Durham County.

Part of the crest is a plough symbolising the rural and urban elements of the new authority, while the length of rail held by one of the supporters is a reminder of how Gateshead was once an important railway centre.

The motto, "In Unity, Progress", was decided by a postal ballot of councillors, who voted on several suggestions put forward by both members and officers.

Was this page useful?
Yes No